feature is a daily report sharing the links and news of Kernels
Alumni. Previously, we updated these throughout the day on Facebook as
they happened. I will be posting each morning to try and keep the links
as relevant and fresh as I can. If something comes across during the
day, it likely will sneak into another post. Late today with the links.
Without
further
delay, your Harvester Links for 4/6/11:

Jordan Walden (2008) struck out one in a scoreless ninth inning to earn
his 1st save of the season in the Angels 5-3 win over the Rays. Michael
Kohn (2009) allowed a solo HR working the eighth inning.

Bobby Jenks (2001) struck out three batters in a scoreless 7th innings in the Red Sox 3-1 loss to the Indians.

David Herndon (2007) struck out one while allowing a run in the sixth inning of the Phillies 7-1 loss to the Mets.

Jered Weaver, Hank Conger (2007) bring out the best in each other – LATimes.com 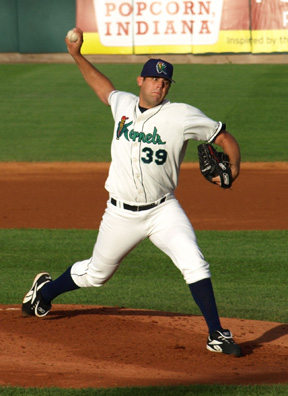 Jordan Walden
posted a 4-6 mark with a 2.18 ERA during the first half of the 2008
season for the Cedar Rapids Kernels. Walden struck out 91 batters in 107
1/3 innings of work before being promoted to Rancho Cucamonga
mid-season.

Jordan Walden made his MLB debut on
August 22, 2010. Walden posted a 0-1 record with a 2.35 ERA and earned a
save working 15 1/3 innings of relief work for the Los Angeles Angels
of Anaheim last season.