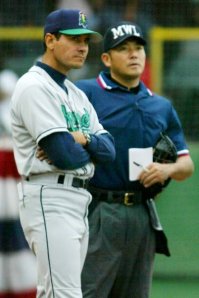 Ever Magallanes (Cedar Rapids Kernels manager – 2007) has been inducted into the Caribbean Baseball Hall of Fame this past week along with Fernando Valenzuela and Houston Jimenez. Magallanes played 11 seasons for the Monterrey Sultanes, Tabasco Olmecas, and the Oaxaca Guerreros in the Mexican League. He appeared in three major league games with the Cleveland Indians making three plate appearance in 1991 earning a walk in one of them. On a side note, my second cousin, Rod Nichols, was the starting pitcher in one of those three games Magallanes played in.

Ever Magallanes led the Cedar Rapids Kernels to a 78-61 record in 2007 season, which was the Kernels first winning season and playoff season during my time working there. Magallanes has been working within the Chicago White Sox organization as a manager and coach since 2009. He and his brother Bobby Magallanes (Cedar Rapids Kernels manager 2004-05) have been selected to coach at the annual MLB Futures Game at the All-Star break multiple times.