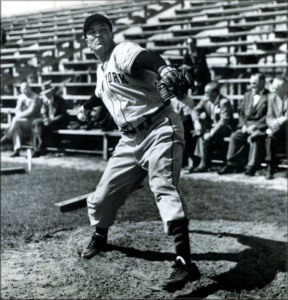 On September 1, 1947, Ray Poat (Cedar Rapids Raiders – 1941) struck out four while pitching a complete game to lead the New York Giants to a 12-2 win over the Boston Braves at the Polo Grounds. Poat worked around 11 hits and did not walk a batter in the contest.

Ray Poat tallied a 22-30 record and a 4.55 ERA during his six season MLB career playing for the Indians, Giants and Pirates.

Poat was part of the 1940 and 1941 Cedar Rapids Raiders teams. The 1940 Raiders squad finished 74-51 under manager Ollie Marquardt. Cedar Rapids defeated Springfield (3-0) in the opening round of the Three I League playoffs and then topped Decatur (3-1) to win the Three-I League championship. Ray Poat posted a 12-8 record and a 4.88 ERA in 1940.

The 1941 Raiders finished 72-49 under manager Ollie Marquardt. Cedar Rapids defeated Springfield (3-1) in the opening round of the playoffs and then topped Decater (3-2) in a five game series for the Three-I League Championship. Ray Poat went 17-6 with a 2.90 ERA in 1941. 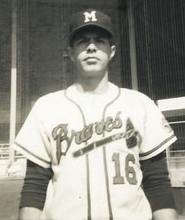 Dick Kelley posted a 18-30 mark with a 3.39 ERA during his seven year MLB career playing for the Milwaukee Braves, Atlanta Braves and the San Diego Padres.

On August 24, 1959, Bob Anderson (Cedar Rapids Raiders -1954) led the Chicago Cubs to a 3-0 win over the Milwaukee Braves pitching a complete game shutout. Anderson struck out five batters while allowing six hits and one walk.

Bob Anderson posted a 36-46 record with 13 saves and a 4.26 ERA during his 7 year career playing for the Chicago Cubs and Detroit Tigers.

Bob Anderson was a member of the 1954 Cedar Rapids Raiders team that finished in 6th place with a record of 63-72 under manager Bill Prince. Anderson was 3-1 with a 2.92 ERA in 40 innings of work for the Raiders.

Clint “Connie” Conatser hit .271 with 6 HR and 39 RBi during his 2 year MLB career playing for the Boston Braves. He had 1 RBI during the 1948 World Series as the Boston Braves fell to the Cleveland Indians in six games.

Clint Conatser was a member of the 1941 Cedar Rapids Raiders team that finished 72-49 under manager Ollie Marquardt. The ’41 Raiders defeated Springfield in the opening round of the playoffs and then topped Decatur in a five game series for the Three-I League Championship. Conatser went 1-4 playing in a single game for Cedar Rapids squad. He then entered the service following the season and was in active duty between 1942-1945.

On August 17, 1954, Joe Frazier (Cedar Rapids Raiders – 1942) entered the game as a pinch hitter in the seventh inning and came through with a three-run HR to lead the St. Louis Cardinals to a 4-1 win over the Milwaukee Braves at County Stadium.

Joe Frazier hit .241 with 10 HR and 45 RBI during his 4 year MLB career playing for the Cleveland Indians, St. Louis Cardinals, Cincinnati Reds and the Baltimore Orioles. Frazier worked as a manager in the Astros and Mets organizations following his playing days. He took the helm for the New York Mets in 1976 and led them to a third place finish with a 86-76 record. Frazier was replaced by Joe Torre (Torre’s first managing gig) 45 games into the 1977 season after a slow start.

Joe Frazier was a member of the 1942 Cedar Rapids Raiders team that finished with a mark of 74-43 and won the Three-I League Championship under manager Ollie Marquardt. The Raiders defeated Evansville in the 1st round of the playoffs and then took down Madison in the Championship series. Frazier hit .315 with 8 HR and 36 doubles in 116 games for Cedar Rapids. 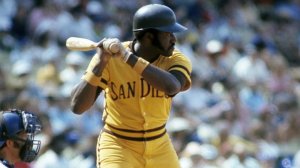 Nate Colbert was part of the 1965 Cedar Rapids Cardinals squad that finished in 3rd place with a record of 62-52 under manager Ron Plaza. Colbert hit .274 with 9 HR in 81 games for Cedar Rapids.

Freddie Benavides hit .253 with 4 HR and 52 RBI during his four year MLB career playing for the Reds, Rockies and Expos.

On July 16, 1964, Hank Fischer (Cedar Rapids Braves – 1959-60) pitched a complete game shutout to lead the Milwaukee Braves to a 6-0 victory over the San Francisco Giants. Fischer struck out 3 while allowing 4 hits and 3 walks in the game. He also went 1-4 at the plate with a double and 2 RBI.

Hank Fischer compiled a mark of 30-39 and a 4.23 ERA during his six year MLB career playing for the Braves, Reds and Red Sox.

Major League All-Star Ron Hunt (1960-61) is returning to Perfect Game Field tonight along with his fellow Cedar Rapids Braves teammates Larry Huebner (1959-61), Barry Morgan (1961) and Paul Snyder (1959, 1961).  They are celebrating the 50th anniversary of their 1961 season here in Cedar Rapids when the team finished 2nd with a 73-57 record under manager Jimmy Brown. The Cedar Rapids Braves alumni will be involved in pregame festivities and will be signing autographs on the concourse during the game.

Ron Hunt went on to a 12 year MLB career playing for the Mets, Dodgers, Giants, Expos and Cardinals. He finished 2nd to Pete Rose in the National League Rookie of the Year voting after hitting .272 with 10 HR 42 RBI for the Mets in 1963. He led the Mets in hits (145), Batting average, doubles (28), and runs scored (48) playing for Casey Stengal.

Ron Hunt was well known for being hit by pitches. He held numerous records for the stat when he retired after the 1974 season. He was also known for being very difficult to strike out. Hunt only struck out 382 times in 6158 plate appearances. He walked 555 times and was hit by a pitch 243 times for comparison. He led the league sevenstraight years in HBP from 1968-1974. 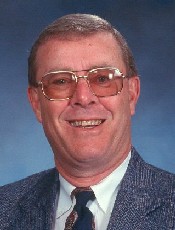 Snyder managed the Greenville Braves in 1963, the Sarasota Braves in 1964 and 1966, the Binghamton Triplets in 1965, the Magic Valley Cowboys in 1970 and the Greenwood Braves in 1972. In 1973, Snyder joined the Braves front office as the assistant minor league administrator prior to taking the reins of the Braves player development system in 1977.