Lenny Harris hit .269 with 37 HR and 369 RBI during his 18 year MLB career playing for the Reds, Dodgers, Mets, Rockies, Diamondbacks, Brewers, Cubs and Marlins. Harris is best known for holding the record for the most pinch hits in a major league career. He returned to Cedar Rapids earlier this season as the hitting coach for the Great Lakes Loons, the Midwest League affiliate of the Los Angeles Dodgers.

Lenny Harris was a member of the 1984 Cedar Rapids Reds team that finished with a record of 75-63 under manager Jim Lett. Harris hit .246 with 6 HR in 132 games for Cedar Rapids. 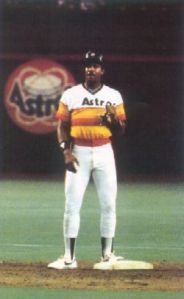 Jerry Mumphrey hit .289 with 70 HR and 585 RBI during his 15 year MLB career playing for the St. Louis Cardinals, San Diego Padres, New York Yankees, Houston Astros and the Chicago Cubs. He helped the New York Yankees win the 1981 American league pennant and was selected to the 1984 N.L. All Star squad.

Jerry Mumphrey hit .182 in 11 games with the 1972 Cedar Rapids Cardinals. The team finished in 8th place with a record of 51-77 under manager Gary Geiger.

Bob “Hawk” Taylor hit .297 with 22 HR in 106 games for the 1958 Cedar Rapids Braves squad. The team finished with a mark of 77-53 under manager Alex Monchak’s guidance and won the Three-I League Championship defeating Davenport (3-2). 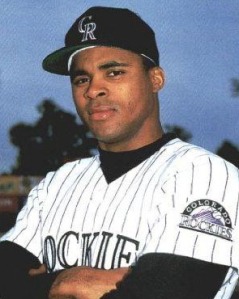 On June 6, 1993, Chris Jones (Cedar Rapids Reds – 1986) was 3-5 at the plate with two HR, four RBI and scored two runs in the Colorado Rockies 11-7 loss to the Philadelphia Phillies at Veterans Stadium.

On May 3, 1987, Eric Davis (Cedar Rapids Reds – 1982) had a career day hitting three home runs while going 4-5 at the plate to lead the Cincinnati Reds to a 9-6 win over the Philadelphia Phillies. Davis finished the day with six RBI and a stolen base in the win.

Davis was part of the 1982 Cedar Rapids Reds squad that finished in 9th place with a mark of 61-79 under manager Randy Davidson. Eric Davis hit .276 with 15 home runs, 56 RBI and stole 53 bases for the CR Reds that season. 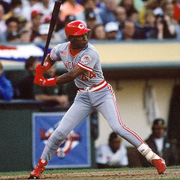 Davis was part of the 1982 Cedar Rapids Reds squad that finished in 9th place with a mark of 61-79 under manager Randy Davidson. Eric Davis hit .276 with 15 home runs, 56 RBI and stole 53 bases for the Cedar Rapids Reds that season.

On April 26, 1962, Tommie Aaron (1960 Cedar Rapids Braves) went 3-5 with a home run, a triple and 4 RBI while scoring three runs in the Milwaukee Braves 10-4 win over the Philadelphia Phillies at County Stadium.

Tommie Aaron, the brother of Hank Aaron, hit .229 with 94 RBI during his seven season career with the Braves. He hit a total of 13 major league home runs, with eight of them coming in his first year of 1962, but along with his brother’s then Major League record 755, together they hold the Major League record for the most career home runs between two brothers (768).

The only other brother of a 500-home run man to play in the majors was Rich Murray, (1976-77 Cedar Rapids Giants) brother of Eddie Murray, who hit 4 home runs in a brief major league career.

Tommie Aaron was part of the 1960 Cedar Rapids Braves team that went 71-69 to finish in fourth under manager Jimmy Brown. Aaron led the team with a .299 batting average and hit 20 home runs to go along with 88 RBI that season.

feature is a morning report sharing the links and news of Kernels
Alumni. Previously, we updated these throughout the day on Facebook as
they happened. I will be posting each morning to try and keep the links
as relevant and fresh as I can. If something comes across during the
day, it likely will sneak into another post. Without
further
delay, your Harvester Links for 4/2/11:

Jordan Walden (2008) struck out 2 batters in a scoreless 8th inning. Michael Kohn (2009) allowed a leadoff HR in the bottom of the 9th to take the loss.

David Herndon (2007) allowed 2 runs in an innings of work as the Phillies defeated the Astros 5-4.

Mike
Napoli enters the 2011 season with a career .251 batting average, 92 HR
and 249 RBI in five seasons playing for the Los Angeles Angels of
Anaheim